K9 TailSaver® is a complete set and Includes:

Support Harness  Secures the Tail-Sleeve so it will not move or come off. The Straps are adjustable at both the neck and girth, and fasteners provide easy on/off attachment to the Tail-Sleeve. It's designed for comfort and long wear times, with no pressure points.

Materials: 1/6" thick breathable Polyester AirMesh with Ripstop Nylon on exterior of harness to keep it dry, and flexible Neoprene at neck for comfort.

Protective Tail Sleeve The tail sleeve completely encases your dog's tail and is made of durable cotton canvas lined with 1/6" thick AirMesh for cushioning , breathability, and impedance of wag. It has easy to use fasteners and is long enough for any tail. It is washable and fits long or short tails. A  belt provides anti-twist security and a 2nd belt is included for positioning the tail if needed. The Tail Sleeve will not move in any direction with 4 different anchor points to the harness. Your dog's tail-tip injury will stay clean, ointment stays on, you can check the wound, and your dog's tail can heal.

Anchoring Belts (2) A waist to chest belt and a universal belt is includes for anti-twist action that will keep the tail sleeve on even the most active dog. A Universal Belt used for holding tail in specific positions if needed. . 5 Velcro strips to use if/as needed.

Materials: 100% Cotton Canvas Tail Sleeve with Polyester AirMesh padding.  Two separate belts that hold the Tail Sleeve in a unique anti-twist design. One of them can be used to hold the tail either from going up over the back or going down to the ground.

Guaranteed to remain in position and be comfortable or your money back.

The tail saver has been worn by my Sprocker for 2 weeks now. We ordered a small and it fits perfectly and he isn't bothered by it at all. He can play, toilet and sleep comfortably.My only issue was actually receiving the harness. The first one I ordered I never received and I after some chasing resorted to ordering another. The second arrived within a week (bear in mind import charges when buying from the UK). So I have paid for two which is frustrating as I did hope for a refund of the first.
Anyway, as I said the product itself is excellent and I would highly recommend if your dog suffers with Happy Tail Syndrome. The only issue was the missing first delivery (courier issues?) and Import tax which added another £23 to the price for UK buyers.

The product is high quality and does what it says it will do and that is to protect the tail. I am happy with the outcome of this purchase and would recommend it to anyone. The customer service is the best. Thank you Julie for all your help!

My dog has been diagnosed with canine compulsive disorder after struggling for two years with no answers. He compulsively chews his tail to the point of injury and the vet has said he is not a candidate for amputation as he would most likely still chew the stump. I have never heard of anyone with this problem, until I came across K9 TailSaver, after some random googling one day.

Since my dog is smaller than most dogs with tail problems, he was able to slip out of the sleeve a few times, but thanks to his guardian angel, Julie, at K9 TailSaver, we were able to get him a harness that was custom made for his weird little body.

If you are on the fence — buy it! The customer service I've received has been phenomenal. I have stayed in five star hotels with less attentive staff. For the first time in too long, I feel like someone is on my side and understands the struggles those of us with wonky dogs face. 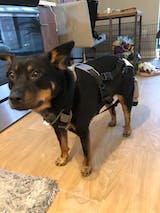 We tried many homemade contraptions over the last couple years trying to stop our overly happy 185 pound gentle giant mastiff from destroying his tail tip and splashing blood drops all over the house. The happy tail saver is a simple design that works. We ordered the large harness and medium tail piece. With his very large chest, it was a bit tight when he sat down so we decided to attach the tail saver to our giant's existing walking harness. Because of his unusually immense size his harness fit him better and he was used to it. It works wonderfully, his tail is healed, and he has had no more injury since. Also, Julie and the tail saver team have great customer service. Our first package got lost in shipping and they sent another quickly at their cost.

Like many other reviewers we unsuccessfully tried to bandage our Weimaraner's tail for weeks before we found this clever invention. It's an awkward contraption and she clearly didn't care for it, but she got used to it after a few days. She's 70 pounds so we ordered a large but we probably would have been better off with a medium. We were so desperate for a solution that we decided to try to make it work versus waiting for a second order, so we tightened the straps as far as they would go and hoped for the best. She got out of it a few times but kept it on most of the time, especially after she got used to it. Once she started wearing it the wound never reopened - not once. Luckily she's not a chewer so we didn't have to worry about her messing with it. This tail saver definitely saved our dog's tail.

A
A.
Great invention!

Sam had a case of happy tail syndrome. I found this after taking to google in search of something... anything that could help. They were extremely helpful with sizing and even with replacement parts. The only issue I had was him keeping his tail in the bag. He somehow kept Houdini-ing out. I highly recommend this if you can catch the tail issue in the very early stages.

Hi Amber, thank you for the super nice review. It's very helpful to other's in the injured dog tail community, and for me too.

What to check for if the tail comes out of the Tail-Sleeve:

1. Did the straps loosen? If the straps aren't staying as tight as when first adjusted, push the strap an extra time through the slide buckle, or or use the velcro strap (included) to make sure the straps don't loosen.

2. Some tail shapes require our universal belt with jaw clips on either end. There's a test to see if your pup needs it. If you lift the tail sleeve does the sleeve slide up the tail... at all? If yes you need to use this this belt to provide downward pressure on the Tail Sleeve. It's included with all sets.

4. Is the hip-to-chest strap mistakenly placed around your pup's waistline?

It needs to anchor on the underside of the harness.
E
E.M.
Disappointed

It seemed to have been working for a few days but then she chewed a hole on top of the tail saver. I took it off and sewed it put back on.
She also popped one of the snap on buttons completely off as well had to tie it with paracord to secure it. A few days later she completely shredded it no more tail saver. The body harness is still good except for the one missing snap on but the tail saver didn't work. I didn't recieve in time so her tail had to get half of her tail amputated so we used it to keep her from getting at the stitches. Clearly it did not work. Spent $49 in hopes of it helping but it did not which was somewhat disappointing as the reviews were so great. I received a refund as it didn't work as the reviews said but it was a chance I took to try and help our baby girl out. I am glad it worked for other people. Now I have to find something to keep her from getting at the rest of her tail until it completely heals.

I tried all methods and nothing worked for my american bulldog. He would either take off the bandaging or take off the home made sling. The sling was a great idea aswell but got dirty fast. This product is amazing. Would highly recommend for any dog that has a large tail.

K
K.R.
This saved my dog

I cannot say enough about the tail saver. I had tried everything to help my pups tail heal after an accident caused him to rip the tip of his tail off and go through the amputation to fix it. Unfortunately I did not find the tail saver sooner and was bandaging and using a cone between him getting to the end of the bandage and chewing at it a couple times and it never getting any air the surgery failed and the tip started to get necrosis. I ended up having to use a muzzle and I did use pipe insulation and it was working but I was still always worried if i left him even for a few minutes the pipe insulation would come off and he would chew on the tail again. Finally my tail saver came and it has been the best thing ever we are finally getting through this and my sweet little guys tail is finally healing.

I have been trying to heal Bear's tail for over 2 years. Every thing I have tried has failed. He is a Houdini. Getting off any wrap or splint put on within minutes. After having the tail saver on for 30 minutes her emerged without it! I was crushed. After contacting the company they were more than helpful coming up with ideas and solutions. After many trial and errors on harnesses and straps. We have the perfect fit and are on the road to Healing. Thank you so much for the caring staff and a great product. Highly recommend. 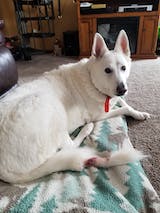